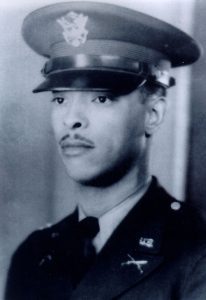 On Dec. 26, 1944, enemy troops closed in on 1st Lt. John Fox situated on the second floor of house in the Italian village of Sommocolonia. Surrounded and with little hope of rescue, Fox radioed for an artillery bombardment of his position. Fox bravely sacrificed his life as he called in the order, “Fire it! There’s more of them than there are of us. Give them hell!”

The oldest of three sons, John Robert Fox was born in Cincinnati, Ohio on May 18, 1915. Like other African Americans in the United States, Fox navigated a world of prejudice and segregation. After high school, he attended college at The Ohio State University but later transferred to Wilberforce University, a historically Black school. There, Fox participated in ROTC and studied science. He graduated in 1941 with a degree in engineering and received a commission as a 2nd lieutenant in the Army.

Due to the Army’s policies, Fox joined the segregated 92d Infantry Division. The majority Black division, with some white officers, was formed in October 1917 for service in World War I. It was reactivated on Oct. 15, 1942 for service in World War II. Known as the “Buffalo Soldiers” to honor the segregated regiments that served during the Indian Wars, the 92d was deemed a “colored” division. Fox trained with the 92d at Fort Huachuca, Arizona as a forward observer of the 598th Artillery Battalion. As a forward observer, Fox served on the front lines calling in artillery strikes on enemy positions. While the men of the 92d trained, Army leadership debated whether to allow Black Soldiers to serve in combat. This changed in July 1944 when the division deployed to Italy.

As soon as the 92d arrived in Italy, they experienced heavy fighting and harsh conditions. Though the division saw high casualties, they continued to push up the Italian coast against the Germans. By December 1944, the 92d reached the Serchio River Valley near Sommocolonia, Italy. Harsh winter conditions and reenergized German resistance slowed their movement to a crawl. On Christmas Day, as the 92d guarded Sommocolinia, German troops snuck into the town camouflaged in civilian clothes. By the next morning, the Germans overran the city and began an attack on the U.S. positions. U.S. forces decided to retreat due to heavy artillery fire from the Germans. However, Fox was not a part of the withdrawal.

Fox and his observer party remained behind on the second floor of a house, coordinating defensive fire and protecting the retreating troops. Fox reported at 8 a.m. that the Germans were in the streets and attacking in strength. Though the Germans continued to push forward, Fox stayed in position, radioing in artillery strikes as German troops moved closer. As the Germans continued to push forward, Fox called for artillery fire increasingly close to his position. He radioed his battalion commander, “That was just where I wanted it. Bring it in 60 yards!” His commander argued that the bombardment would be too close to their position. The Germans continued to press forward, surrounding his position. Despite the danger to himself, Fox repeated his call for artillery fire. The last communication from Fox was, “Fire It! There’s more of them than there are of us. Give them hell!”

Fox and his observation party were killed by friendly-fire from the bombardment. Approximately 100 Germans were also killed. Fox’s sacrifice delayed the enemy offensive, allowing the retreating Soldiers to re-group. American forces re-captured Sommocolinia a few days later. Buried in Whitman, Massachusetts, the Army did not initially recognize Fox’s sacrifice in the same way they would have a white Soldier. This was not a unique position, as no Black Soldiers received Medals of Honor during either World War for their actions in the field. As racial attitudes shifted in the decades following World War II, many African American Soldiers began to receive long overdue recognition. On May 15, 1982, Fox was posthumously awarded the Distinguished Service Cross. In the late 1980s, the Department of Defense initiated a review of Distinguished Service Cross awards to see if any Soldiers had been denied the Medal of Honor due to prejudice. The review identified several men from both World Wars who had performed deeds worthy of a Medal of Honor. On Jan. 13, 1997, the Distinguished Service Cross awards of seven Black veterans of World War II were upgraded, including Fox’s award. These men were the first Black Soldiers to earn a Medal of Honor from World War II. President Bill Clinton posthumously awarded Fox’s Medal of Honor to his widow, Arlene Fox.

Initially denied with the Medal of Honor during the war, Fox’s actions in Italy ultimately led to him receiving the honor over 50 years later. Though he faced segregation and discrimination at home and in the Army, Fox displayed gallantry and bravery in service to a country that did not treat him equally. Fox’s actions at Sommocolinia saved the lives of his fellow Soldiers and demonstrated the valor of the African American Soldiers to serve in World War II.