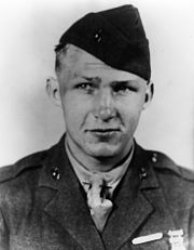 Private First Class Harold Christ Agerholm (29 January 1925 - 7 July 1944) was a U.S. Marine during World War II. He was posthumously awarded the U.S. military's highest award for valor, the Medal of Honor, for his actions while engaged with Japanese forces on Saipan in the Marianas Islands.

Harold Christ Agerholm was born on 29 January 1925 in Racine, WI, and attended the Racine public schools. After working for five months as a multigraph operator for the Rench Manufacturing Company, he joined the U.S. Marine Corps Reserve on 16 July 1942.

Agerholm received his recruit training at the Marine Corps Recruit Depot San Diego, CA. Upon completion of his training he was assigned to Headquarters and Service Battery, 4th Battalion, 10th Marines, 2nd Marine Division. He embarked for overseas duty on 3 November 1942 and went to New Zealand, where he trained with his battalion in Wellington for eleven months.

He was promoted to Private First Class in January 1943 and became the battery store room keeper. He took part in the fighting on Betio Island, Tarawa Atoll, in November 1943. From Tarawa he went to the Hawaiian Islands with the 2nd Marine Division where they trained for their forthcoming operation on Saipan.

Agerholm landed on Saipan three days after D-Day. With the battle for the island raging for three weeks, the enemy launched a vigorous counterattack on 7 July 1944 and a neighboring battalion was overrun. PFC Agerholm volunteered to help evacuate casualties. For nearly three hours, he single-handedly evacuated 45 casualties while under intense rifle and mortar fire before being mortally wounded by a Japanese sniper. For this action, he was posthumously awarded the Medal of Honor.

Citation: For conspicuous gallantry and intrepidity at the risk of his life above and beyond the call of duty while serving with the 4th Battalion, 10th Marines, 2d Marine Division, in action against enemy Japanese forces on Saipan, Marianas Islands, 7 July 1944. When the enemy launched a fierce, determined counterattack against our positions and overran a neighboring artillery battalion, Pfc. Agerholm immediately volunteered to assist in the efforts to check the hostile attack and evacuate our wounded. Locating and appropriating an abandoned ambulance jeep, he repeatedly made extremely perilous trips under heavy rifle and mortar fire and single-handedly loaded and evacuated approximately 45 casualties, working tirelessly and with utter disregard for his own safety during a grueling period of more than 3 hours. Despite intense, persistent enemy fire, he ran out to aid 2 men whom he believed to be wounded marines but was himself mortally wounded by a Japanese sniper while carrying out his hazardous mission. Pfc. Agerholm's brilliant initiative, great personal valor and self-sacrificing efforts in the face of almost certain death reflect the highest credit upon himself and the U.S. Naval Service. He gallantly gave his life for his country.

Algerholm's mother was presented his Medal of Honor on 25 June 1945 by the Commandant of the Ninth Naval District, because of her request that she "didn't want any public presentation."

On 20 June 1946 in Boston, MA, the new destroyer USS Agerholm was commissioned and named in honor of PFC Agerholm.

A middle school and an elementary school in his home town of Racine, WI, also bear his name (Jerstad-Agerholm).

The Harold C. Agerholm Memorial Gun Park near the headquarters of the 10th Marine Regiment in Camp Lejeune, NC, is named in his honor.