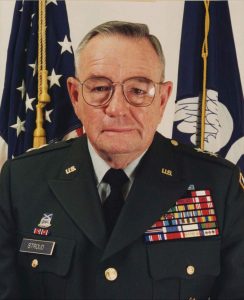 Major General Ansel M. Stroud, Jr., was born in Shreveport, Louisiana, on April 5, 1927 and was raised in Dixie, Louisiana.

General Stroud enlisted in the Army in April 1944. While in the Army Specialized Training Program, he attended Baylor University and Texas A&M and later graduated from the University of the State of New York in Albany with a Bachelor of Science in General Studies. He was commissioned a Second Lieutenant in 1946 after completing Officer Candidate School at Fort Knox, Kentucky. He served as an Instructor at Fort Knox and then was assigned to the 2d Division Reconnaissance Troops before being discharged.

He joined the Louisiana Army National Guard in 1947. His military education includes the Command and General Staff College at Fort Leavenworth, Kansas, and the Army War College at Carlisle Barracks, Pennsylvania.

The Ballad of Rodger Young

In 1968, General Stroud was assigned as Chief of Staff for the State Emergency Operations Center at the Headquarters of the Louisiana Army National Guard in New Orleans, and in 1971, he became the Commander of the 356th Support Center, also in New Orleans.

He was appointed as Assistant Adjutant General of the State of Louisiana on 9 May 1972 and was promoted to Brigadier General in October of the same year. In August 1978, he accepted a dual assignment as the Commander of the 256th Infantry Brigade (Mechanized) in Lafayette, Louisiana..

In 1977, General Stroud was selected to direct a Department of the Army study on full-time training and administration for the Guard and Reserve. This was known as the “Stroud Study” and was accepted by the Department of the Army as the guideline for the Army National Guard and Army Reserve full-time manning programs. The Stroud Study was the basis for launching the Active Guard Reserve program we have in force today.

General Stroud was selected as the Adjutant General for the State of Louisiana in October 1980 and was promoted to Major General on 10 May 1981 with Federal recognition of the same date.

In addition to his duties as the Adjutant General, General Stroud has been active with the Boy Scouts of America and is the recip ient of the Silver Beaver Award and Distinguished Eagle Scout Award.

Do You Know What It Means to Miss New Orleans

When the Saints Go Marching In