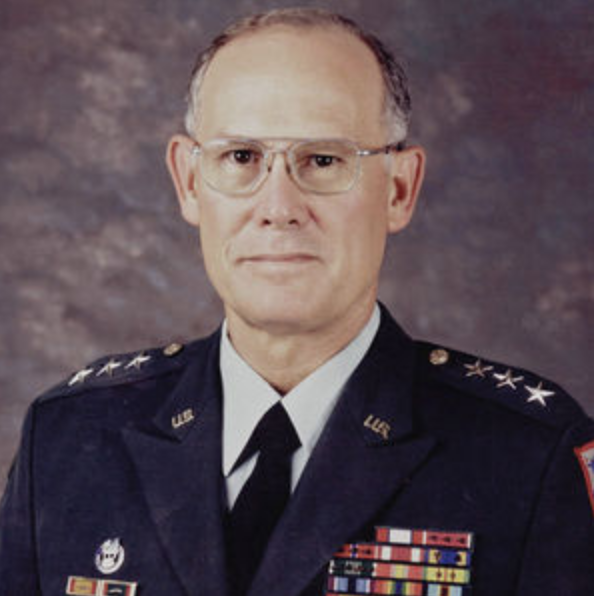 Born 1938 in Ryan, Oklahoma, Wilson Allen 'Dutch' Shoffner, the youngest son in a family of ten children, grew up on the farm and in his dad's blacksmith shop. Growing up with his older brothers in World War II, and his Dad a World War I veteran, service to country was an expectation of any able-bodied man.

In 1958, Cameron College provided the opportunity of a lifetime when he met his only true love, Beverly Beauchamp, a native Lawtonian and the sister of then six-year-old Barry Beauchamp, whom some of you know today as the Superintendent of Lawton Public Schools. Unfortunately, this love life was put on commute as Beverly graduated from the University of Oklahoma in Journalism and Dutch from Oklahoma State University in Mechanical Engineering. A Distinguished Military Graduate, Dutch received his Regular Army commission in the Field Artillery in 1961.

You're the Cream in My Coffee

However, the Army had to wait a few weeks, until he and Beverly were married June 4, 1961, in the Old Post Chapel at Fort Sill. Second Lieutenant Dutch then reported for duty as a Guidance Platoon Leader in the 5 Battalion, 41st Artillery, a Lacrosse Battalion. For those of you who may remember, the Lacrosse was one of the Army's first attempts at a precision weapon with a very complicated guidance and control system and a 500 pound shaped charge warhead; and oh by the way it also had a nuke. Reliability was lousy, but it was quite photogenic.

Hey Look Me Over

With his jumpstart with nukes, the Army had a special assignment for Dutch in Turkey with a warhead detachment collocated with a Turkish Artillery Battalion. Given that the space race and missile development was heating up, Dutch left Turkey for the Guided Missile Systems Course, MOS 1181, at Fort Bliss. That year was a graduate-level cram course of science and engineering courses related to guided missiles with a four-hour exam every Friday morning. But Juarez and El Paso were great places to reset on the weekends.

The utilization tour from the course was with the Artillery Board. The highlight of that assignment was the birth of the Shoffner's first son, Allen, on July 4, 1966, And like his mom, he too was born at Fort Sill. Following the Artillery Board, Dutch finally attended the Officer Advanced Course and recalls the visit from FA Branch with the news that things did not look good for promotion to Major given his nontraditional assignments. And it looked like that might be the case since he was reassigned to Fort Sill as an instructor in the Guided Missile Department and then to the Cage, an instructor on nukes, while his colleagues were all off to combat in Vietnam. The highpoint of this tour was the birth of the Shoffner's second son, Andy, also at Fort Sill.

Raindrops Keep Falling on My Head

Fortunately, the branch advice was not on target and Dutch was promoted to Major and finally off to Vietnam with the gh ID in the Delta. Initially, he was the S3 of 18 Battalion, 11th Field Artillery, and as units reconfigured, then to 2nd Battalion, 4th Field Artillery. The battalion commanders were dealt a challenging hand with Dennie Reimer as the S3 and The Dutchman as the XO.

Returning from Viet Nam, the family and he were off to school with the Navy at the Command and Staff Course of the Navy War College at Newport, Rhode Island. All that exposure to nukes landed Dutch in the nuclear briar patch at the Department of the Army for a three-year stint, but he was rescued by the FA Branch Chief and sent to Germany to command a Lance Battalion - 3rd Battalion, 79th Artillery.

Rivers Barracks, Giessen Germany was a beehive of activity during the cold war with Battle Drills, Race Relations, McNamara's Hundred Thousand, and a NATO site full of nukes. But with the patience and guidance from Dick Boyle and Tex Wilson, he navigated the constant stream of Nuclear Technical Proficiency Inspections and Dutch left Giessen for V Corps as G3 Operations just in time for REFORGER 76. Some may recall General Starry's famous 26-page backchannel when he said he could neither command nor control the Corps. For the next year, Dutch was in charge of Task Force Charlie to completely overhaul the Command and Control of the Corps.

After the Army War College sabbatical at Carlisle Barracks in the hotbed of tranquility along the banks of the Conodoguinet, it was back to Fort Sill as Chief of the Doctrine Team in the Directorate of Combat Developments.

It's a Grand Old Flag

With the guidance of Jack Merritt and Jim Drummond, Dutch was knee-deep in TRADOC's design of Division 86 and the many BOGSATS (Bunch of Generals Sitting Around a Table) to frame the design for future Artillery structure. The bright spot in this endeavor was a visit to Fort Sill and a decision by General Starry to uninvent the CEWI battalions and put the radar assets in the DIVARTY and leave the intel guys with an EW Company; unfortunately, that decision did not stay fixed with the Department of the Army and Congress returning to the Intel weenies their prized creation. Promotion to Colonel is always a special occasion, but when the Chief of Field Artillery does it - it is special... Red Cape and all.

Dutch then took command of the 214 Field Artillery Brigade at Fort Sill but that was interrupted with a summer diversion to Fort Chaffee, Arkansas, to receive thousands of Cubans invited into the United States by Jimmy Carter. It made for a long, hot summer keeping all the glass balls in the air, and Gene Love, Cliff Potter, and Larry Tinberg got to practice their NRAS and nuke skills at Chaffee in between their Cuban Patrols.

Following Brigade Command, Dutch was ordered to Fortress Monroe as the Director of Analysis for TRADOC. What a challenge for an Okie to follow a smart guy like Tony Pokorny, but the work on the Mission Area Analyses paid off and after two and half years, the Army had a coherent set of requirements with analytic underpin ning to go with the design of Division 86.

Somewhere Over the Rainbow

Dutch was retrieved from the Director of Analysis job to go to Fort Leavenworth as Chief of Staff of the Combined Arms Command. A great opportunity, but the downside was that Allen had to change schools his senior year. Selected for Brigadier, Shoffner's first GO assignment was to "Fix the Army's Deep Battle Problem", ... and get it done in a year. With guidance and priority from the top and a remarkable team of bright, hardworking guys, the Deep Attack Task Force built the analytic simulation, wrote the doctrine, started the development programs (most of them were black at the time), completed the analysis, and turned in the report on time.

Hill Country & On the Road Again

Nineteen eighty-five saw Dutch and Beverly heading to Fort Hood and the First Cavalry Division. Another great opportunity but this time, Andy had to change schools his senior year. Following Don Jones as ADC of the First Team was easy because he had training and maintenance on track. The NTC rotations and ample training opportunities provided impetus for tuning up their Air-Land Battle tactics against the unworthy, unscrupulous OPFOR. With the mentoring of Mike Conrad and John Yeosock and the expert help of brigade and battalion commanders, Dutch completed this assignment and was on the road again.

Carry Me Back to Old Virginny

His next assignment was Chief of Doctrine at Fortress Monroe. Tempo about The Moat was fast-paced with implementation of the Battle Command Training Program, Doctrine for Low-Intensity Conflict, and testing of the Light Divisions. The realization of the Soviet's Operational Maneuver Group provided impetus and priority for establishing the Soviet Army Studies Office.

As the Army rolled along and the Cold War warmed up, the next opportunity was back to the Pentagon as the Director of Requirements and Force Developments with the Deputy Chief of Staff for Operations. Major initiatives were to put in place the comprehensive set of Army Modernization Plans for the Active and Reserve Components. With the tireless work of the able-bodied band of brothers in Force Development, the Army now had a complete set of Modernization and Fielding Plans. Because the Director of Force Development also had the responsibility for prioritizing all developments and procurements, as well as being the guy who identified the bill payers, the action officers whose programs were killed to pay the bills dubbed the Director of DAMO-FD as Damn-Ole Dutch.

After three fast-paced years, the Pentagon yielded Beverly and Dutch to the Third Infantry Division. Bavaria welcomed them to Audie Murphy's Division, Franconia, Franken Wine, and the Marne Express. Training was at the forefront and with the remarkable assistance of world-class ADCs, brigade and DIVARTY commanders, and first draft choice battalion commanders, the Marne Express continued unabated through Deployment of the VII Corps, the First Gulf War, and the Fall of the Berlin Wall. Unstinting selfless service by Dog Faced Soldiers kept the Marne Express on track.

Fort Leavenworth beckoned and Dutch returned to serve as Commandant of the Command and General Staff College and Commander of the Combined Arms Command. Dedication of the Buffalo Soldier Monument was the priority task. Engaging the Russians and shaping future dialogue was one of the several challenges at the Combined Arms Center. The next few years saw numerous exchange visits with Russian senior leaders, the Russian Academy of Sciences, the Frunze Academy, as well as the visit of the Chief of the Russian Army. From years of looking at the Russians through your gun sights to leading an era of peaceful cooperation was a major and successful transition for our Army.

You Raise Me UP

June of 93 found Dutch and Beverly returning to Fort Sill for retirement at the same place they began their military life 32 years before.

Eyes of Texas & The Army Goes Rolling Along

Following retirement from the Army, the Eyes of Texas beckoned them to the Dallas-Fort Worth Metroplex with Dutch as the VP for Product Development at Lockheed Martin Missiles and Fire Control. After a decade with industry, he and Beverly settled into retirement life at Colleyville, Texas, a stone's throw from DFW Airport. Today, they enjoy doing community volunteer work and watching the progression of their sons and their families. Both Allen and Andy are career soldiers and currently commanding battalions. For the Shoffners, the Army goes rolling along.