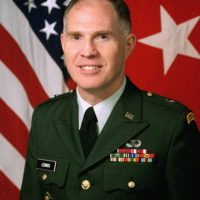 William J. Lennox, Jr was born in Yonkers, New York in 1949 to William and Kathryn Lennox. “Billy" was the oldest of six children and grew up just outside New York City. Young Billy's loving and dedicated parents gave him a firm foundation of intellectual, physical, and ethical development from which to thrive provided by his loving and dedicated parents. With their support, he excelled both academically and athletically during his years in a parochial school in Yonkers and while attending Cardinal Hayes High School in South Bronx. His time spent at the three thousand all-boy parochial school prepared him well for attending West Point.

At the United States Military Academy, Cadet Lennox was successful in his studies, concentrating on International Affairs and four years of Chinese. As an intramural athlete, Bill played football, lacrosse, track, and boxing all four years, In fact, Bill was the brigade boxing runner up at 147 pounds his junior year. In his senior year, Bill was selected as the Brigade Activities Officer, highlighted by the opportunity to me Mr. Bob Hope and former President Richard Nixon.

Shortly after graduation in 1971, 2LT Lennox became engaged to a young Ladycliff girl, Anne Theysohn, who would become his partner throughout his career and his life. Anne was born in Manhattan and had a similar preparation for Ladýcliff that Bill had for Westpoint: a non-co-ed parochial high school leading to a non-co-ed Catholic college. They immediately planned for a December West Point wedding - meaning Anne planned the wedding, reception, invitation list, and seating while Bill headed off for Airborne and Ranger Schools, returning home two days prior to the wedding. After a brief honeymoon to Jamaica, Bill completed the Fort Sill Officer's Basic Course, and the young Lennox's headed for Fort Carson, Colorado. LT Lennox served as a forward observer and battery XO in the 1ST Battalion, 29th FA "Red Barons" before becoming an aide-de-camp to BG Bill Livsey. Bill then completed his time at Fort Carson as the commander of Battery B, 2nd Battalion, 20th FA "Bobcats" During this time a new title was added to Bill - that of "Dad" as his first son, Matthew, was born in Colorado Springs.

Captain Lennox was then "blued." He attended the Infantry Officer's Advanced Course at Fort Benning and after graduation, became a tactical officer for an infantry lieutenants' Basic Course platoon. Consequently, this mechanized warrior had the opportunity to get two 25 mile road marches under his belt. Notably, the four company tac officers for this course (two artillerymen, one signal officer, and one JAG officer) had their company achieve the highest number of Expert Infantryman Badges recipients Benning had ever seen. In the midst of all this activity, Bill still managed to make time for family, and a second son, Andrew, was born at Fort Benning. Then it was off to grad school at Princeton University. Princeton was an interesting and challenging time for the Lennox family. Jon, the third son, arrived while Bill was attending school and the family managed the high cost of living in the New Jersey environment. After two years, three foreign languages, and three general exams, Bill received his master's degree in American Literature and moved the family to West Point, New York to teach young cadets Composition, Literature, Advanced Composition, and other cadet "favorite" courses. During this time, Bill completed his doctoral studies in American Literature as Anne managed home and three busy sons.

1982 found the Lennox family in Bad Kissingen, Germany, where Bill became the S-3 of the 2nd Battalion, 41st FA; stationed 12 miles from the East German border. This chapter was filled with numerous REFORGER exercises, nuclear inspections, ARTEPS, and trips to Grafenwehr, Hoenfels, and Wilderflecken. Two years into the tour, Bill became the battalion XO and by the end of the three-year tour, the Lennox family was happy to return to the good ol' USA - Fort Leavenworth, Kansas - for Command and General Staff College. The year was both enjoyable and educational for all the family and Bill received the "white briefcase" from the graduation speaker, his old boss, now General Bill Livsey.

For the next eighteen months, Bill served as a White House Fellow in the Department of Education under then-Secretary Bill Bennett. MAJ Lennox worked for the Department's Schools Without Drugs Program. Bill Bennett promoted Major Lennox to Lieutenant Colonel as he departed for Fort Carson and battalion command. The 5th Battalion, 29th FA "Eagles" successfully participated in two NTC rotations, a successful nuclear test evaluation thanks to great staff and NCOs. The battalion participated in the cohort program and at one time swelled to over eight hundred soldiers.

Lexington, Massachusetts, and Harvard for the War College year was the next stop for the Lennox family. After enduring the cost of living in the Boston area, they packed their bags and headed back to Washington DC where Bill became Special Assistant to the Secretary of Army Stone and the Secretary's XO, Joe DeFrancisco. In December of 1991, COL Lennox took command of the 24th Divarty at Fort Stewart, GA. He had three Field Artillery battalions and two Air Defense Artillery battalions, however, one ADA battalion was commanded by a certain LTC Bob Lennox and thus had to be transferred to another brigade commander. The Divarty deployed to Kuwait, Somalia, and Haiti and participated in multiple NTC rotations. Following the Divarty, the moves began to come more quickly ...

First a year in DC and then after being selected for BG, COL(P) Lennox became the Deputy Commanding General at Fort Sill and spent the next year and a half working Field Artillery programs, policies, and people under the MG Randy Rigby. Next was Chief of Staff III Corps at Fort Hood working under the leadership of then LTG Tom Schwartz. After a year in Texas, Bill was promoted and moved to Korea as the CJ3, and Deputy Commanding General of 8TH Army. There, the war plan was rewritten and the North and South faced off in the West Sea with the South successfully defending the West Sea demarcation line. Secretary Caldera then called on MG Lennox to be Chief, Army Legislation Liaison. There MG Lennox worked Future Combat Systems gaining critical support from Key Senators and Congressmen to advance Army programs and policies.

In 2001, LTG Lennox was selected to be the 56th Superintendent of the United States Military Academy. Three months into his commend, 9/11 occurred changing the perspective of all at West Point. LTG Lennox worked tirelessly to strengthen all aspects of the Academy - academic, military preparedness, physical fitness, and ethical integrity. After a successful five years at the Academy, LTG Lennox retired in 2006.

Bill then entered the civilian world, forming the Washington office for Goodrich Corporation, and The Aerospace company. His team brought in millions to help Goodrich advance its Research and Development efforts and steered their military sales to 10% growth. Another successful mission accomplished, Bill, retired from Goodrich in 2012. Since leaving Goodrich Bill has established Lennox Strategies and enjoys working with several companies, including work with a former cadet/ Wounded Warrior on projects that continue to serve our veterans.

Bill Lennox often reflects on what he owes to his mentors, his officers, his NCOs, and his soldiers. They never let him down. Particularly, Bill owes the most to Anne, his wife of forty-one years, who was a true partner in all he did from the lieutenant days through his command at West Point and transition into the civilian sector and now retirement. Whether it was attending to their home and family, caring for soldiers, families, or the community in general, Anne was always there providing support, ideas, energy, and a winning spirit. His sons have been a source of great pride as they have grown into fine men, two artillerymen and one working with USAA. As the PCS pace picked up, their high school days were divided amongst many schools, yet they kept pace and succeeded magnificently. Bill and Anne now enjoy five wonderful grandchildren.