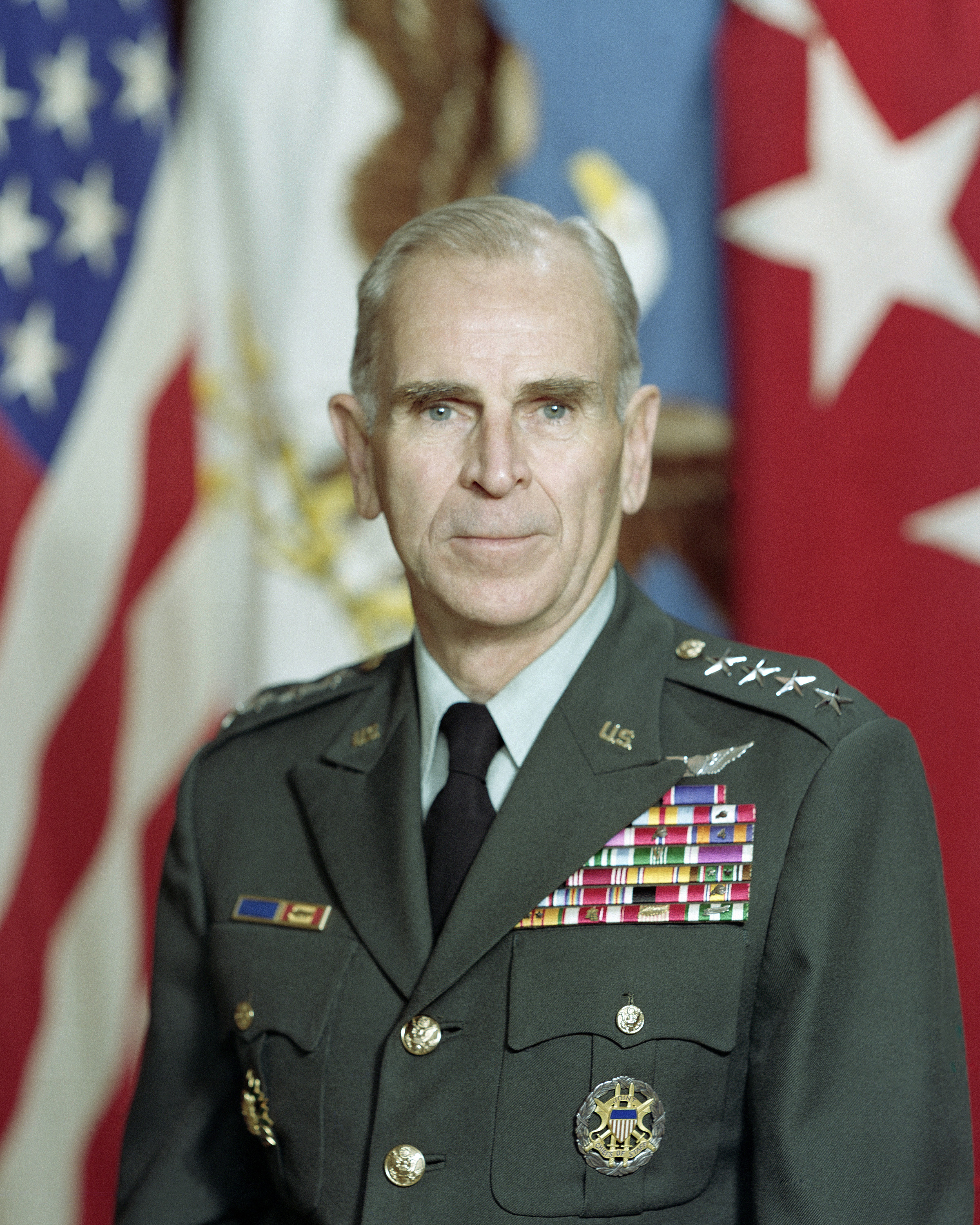 John W. Vessey, Jr., was born in Minneapolis, Minnesota, in 1922. In high school, he joined the Minnesota National Guard, and in 1940, his unit was called to active duty. Private Vessey served in the 34th Infantry Division (Red Bull Division) and fought with distinction in North Africa and Italy during World War II. He reached the rank of First Sergeant before receiving a battlefield commission to Second Lieutenant at Anzio Beachhead in May 1944.

Let Me Call You Sweetheart/Hill Country

In July 1945, Lieutenant Vessey married Avis Funk of Minneapolis and, one month later, arrived at Fort Sill for five and one-half years serving in school detachments and with the 18th FA Battalion. He later returned to Fort Sill for three years to attend the Advanced Course, command an OCS Battery, and serve as an instructor in the Gunnery Department of the Artillery and Guided Missile School.

In the two decades after the war, Captain Vessey attained the ranks of Major and Lieutenant Colonel and attended the Command and General Staff College, the Armed Forces Staff College, and the Industrial College of the Armed Forces. He also earned his Bachelor of Science from the University of Maryland at the age of 41 and, four years later, a Master of Science from George Washington University. He commanded the 2d Battalion, 73d Field Artillery (2-73 FA), 3rd Armored Division, from 1963 to 1965.

Lieutenant Colonel Vessey won distinction in battle again during the Vietnam War. He served as Executive Officer of the 25th Infantry Division's Artillery Brigade stationed near the Cambodian border. He briefly commanded 2-77 FA of the 3d Brigade, 4th Infantry Division, attached to the 25th Division. For his actions during the Battle of Soui Trey, he was awarded Distinguished Service Cross and his battalion was awarded the Presidential Unit Citation.

Colonel Vessey commanded the 3rd Armored Division Artillery from 1967 to 1968 and served as the Division Chief of Staff from 1969 to 1970. He then graduated from the US Army Primary Helicopter School, 15 years older than the next oldest student.

In 1976, General Vessey received his fourth star and assumed command of the Eighth US Army in the Republic of Korea. He also served as the first Commander-in-Chief of the US-ROK Combined Forces Command and the United Nations Command.

General Vessey became the Vice Chief of Staff of the Army in 1979 where he served for three years. In 1982, President Ronald Reagan selected General Vessey to be the tenth Chairman of the Joint Chiefs of Staff. He was the first officer in nearly 30 years to become Chairman without having served as the chief of his service. During his tenure as Chairman, he improved global war planning, enhanced the quality of the Joint Chiefs of Staff's advice to the President, and championed greater efficacy in joint operations. After serving two terms as Chairman of the Joint Chiefs, General Vessey retired in 1985 but continued to serve the nation in a number of special capacities. For Presidents Reagan, Bush and Clinton, he was the Presidential Emissary to Vietnam in the matter of American servicemen still missing from the Vietnam War and other matters.

General Vessey was awarded the Medal of Freedom by President George Bush on December 11, 1992. His service also has been recognized by the Award for Excellence in Diplomacy from the American Academy of Diplomacy, the award of the George Catlett Marshall Medal from the Association of the United States Army, the Sylvanus Thayer Award from the United States Military Academy Association of Graduates and several honorary doctorates from universities and seminaries.

From a Private in the Minnesota National Guard to the highest echelons of military service, General John Vessey devoted 46 years to his country. He was the last four-star combat veteran of World War II to retire from active duty. A "Mud Soldier", General Vessey never forgot the men in the field, earning him the moniker "GI General" from President Reagan. General Vessey enjoyed an illustrious, globe-spanning career few can imagine nine years in combat divisions in Germany, extensive service in East Asia, combat tours in Vietnam and Laos, and additional service in Korea, Thailand, and the Philippines.

General Vessey's ties to the Field Artillery and Fort Sill endure. He first reported with his new bride in late August of 1945 fresh from combat in World War II and went on to serve eight years in tours at Fort Sill, seeing the birth of two sons and the baptism of all three children in the Old Post Chapel. General Vessey is a true 'Soldier's Soldier," and Redlegs around the world proudly claim him as one of their own.