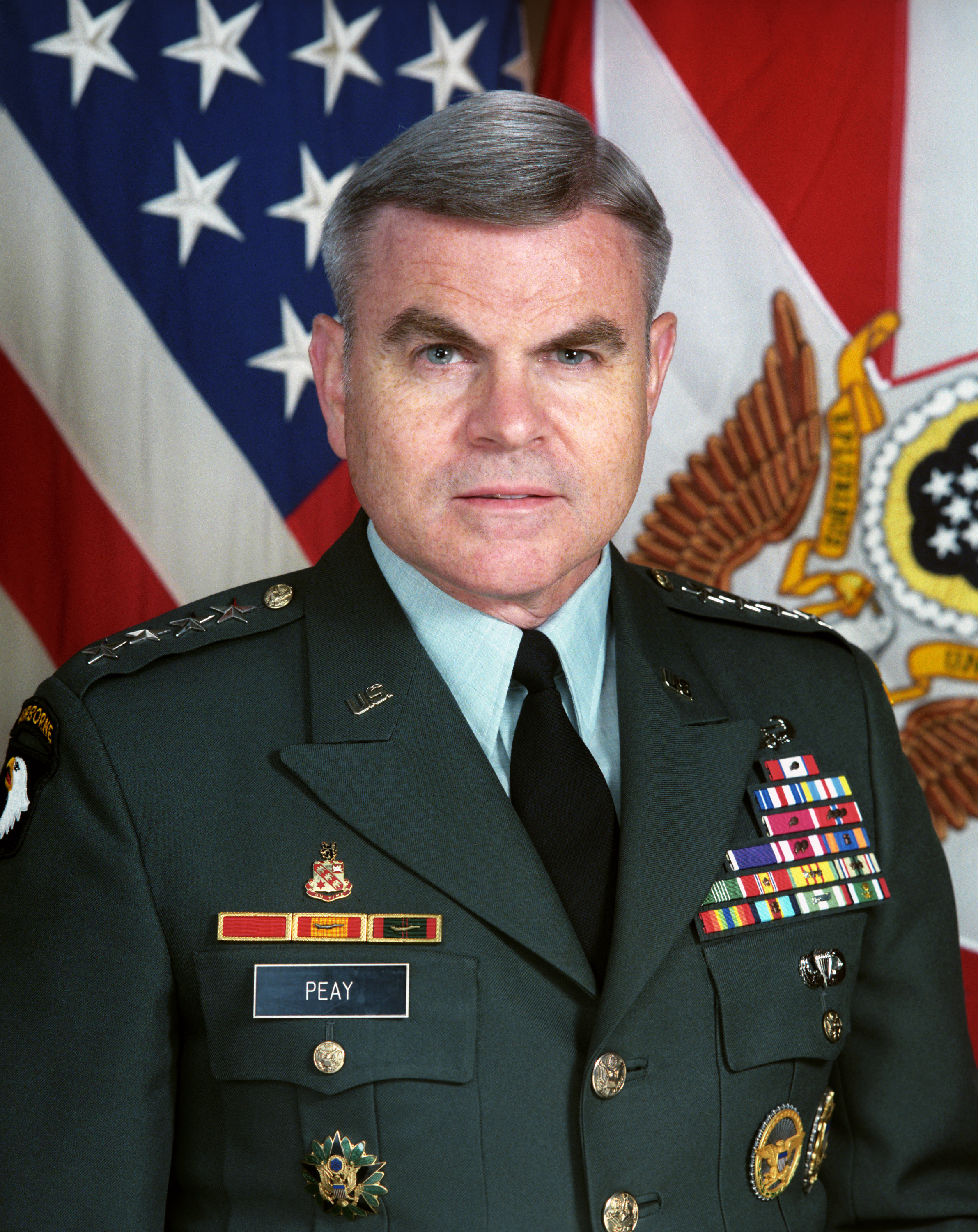 General J.H. Binford Peay III was born on 10 May 1940 in Richmond, Virginia. Upon graduation from the Virginia Military Institute in 1962, he was commissioned a Second Lieutenant of Field Artillery and awarded a Bachelor of Science degree in Civil Engineering.

In August 1964, Lieutenant Peay returned from Germany to Fort Carson, Colorado, where he served as an Assistant S3 of the 2nd Howitzer Battalion, 35th Field Artillery, 5th Infantry Division (Mechanized). Lieutenant (and then Captain) Peay ended his tour of duty at Fort Carson as the Aide-de-Camp to the 5th Infantry Division Commanding General. In September 1966, Captain Peay returned to Fort Sill for the Artillery Officer Advanced Course.

After graduating from the U.S. Army Command and General Staff College at Fort Leavenworth, Kansas, in 1971, Major Peay returned to combat in Vietnam. He served as the Assistant S3 of the 3d Brigade, 1st Cavalry Division, and then S3 of the 1st Battalion, 21st Field Artillery in the same brigade.

In June 1972, Major Peay was assigned to the U.S. Army Military Personnel Center in Alexandria, Virginia, where he served as a Field Artillery Branch assignments officer for nearly three years. Lieutenant Colonel Peay then took command of the 2d Battalion, 11th Field Artillery in the 25th Infantry Division, Hawaii.

After attending the U.S. Army War College, Lieutenant Colonel Peay was assigned as the Senior Aide-de-Camp to the Chairman of the Joint Chiefs of Staff and then as Chief of the Army Initiatives Group in the Office of the Deputy Chief of Staff for Operations and Plans in Washington, D.C. Following his promotion in August 1980, Colonel Peay became the G3 of I Corps in 1981 and then Commander of the Division Artillery in the 9th Infantry Division (Motorized) at Fort Lewis, Washington.

Upon completion of his Divarty command, Colonel Peay returned to Washington, D.C., to serve as the Executive to the Chief of Staff of the Army. Following his promotion to Brigadier General in 1986, he served with the Screaming Eagles as the Assistant Division Commander for Operations in the 101st Airborne Division (Air Assault) at Fort Campbell, Kentucky. After a tour as Deputy Commandant of the Command and General Staff College at Fort Leavenworth, he was promoted to Major General and returned to Fort Campbell as the Commanding General of the 101st. General Peay led the division throughout Operations Desert Shield and Desert Storm in the Persian Gulf, where the 101st conducted the longest heliborne assault in history during its attack on Iraq.

Promotion to Lieutenant General in June 1991 brought an assignment as the Deputy Chief of Staff for Operations and Plans at the Pentagon, serving concurrently as the Senior Army Member of the U.S. Military Committee for the United Nations. General Peay received his fourth star and was appointed the Army's 24th Vice Chief of Staff in March 1993. On 5 August 1994, General Peay became the Commander-in-Chief of the United States Central Command, headquartered at MacDill Air Force Base, Florida. His responsibilities encompassed 20 countries in Africa, the Middle East, the Persian Gulf, and South Asia. General Peay retired from active service on 1 October 1997.

Throughout his distinguished career, both on active duty and since retirement, General Peay has placed the Army's welfare at the forefront. He currently is Chairman of the Board and Chief Executive Officer of Allied Research Corporation and is a Director of United Defense L.P. He also is a Trustee of the George C. Marshall Foundation, the V.M.I. Foundation, and the National Defense University. General Peay, thank you for the years spent leading and caring for soldiers and their families, and for your special love and concern for the Field Artillery. Your continued service helps forge the future of the Army. We take great pride in your accomplishments and salute you with the song Redlegs always will call their own.