Joint and Service doctrine lacks a single methodology for generating desired effects that facilitates targeting the threat while simultaneously engaging allies/partners or civilians present in the operational environment (OE). This gap exists because the nonlethal engagement of friendly and neutral entities cannot be nested within the threat-oriented joint targeting cycle. The following engagement methodology allows commanders to conduct multi-domain, combined arms operations using a single process that generates and synchronizes the desired lethal and nonlethal effects on all entities in the battlespace, whether friendly, neutral, or threat.

The combined lethal/nonlethal engagement methodology is a logical and iterative process that systematically analyzes, prioritizes, and assigns assets against entities to create desired effects, contributing to the accomplishment of the commander’s objectives in any OE. This six-phased methodology nests within the joint targeting cycle and provides battalion or higher commander’s seamless integration with a joint force headquarters.

The methodology begins with the commander’s objectives, engagement guidance, and intent. These flow from problem framing, and provide a clear, concise expression of the operation’s purpose, desired effects across the friendly, neutral, and threat entities, and an understanding of the end state. Guidance includes expectations for tasks to subordinate units and the criteria to prioritize potential engagements. An objective-to-task approach ultimately links design elements (e.g. mission, end state, commander’s guidance, and mission objectives) to desired effects. There are numerous information models and tools available that can help staff gain a better understanding of the OE. The models below * should be integrated into Phase 1:

Entity development entails the systematic examination of entities in the OE and the networks or systems they belong to in order to determine the necessary type, duration, and focus of action that can be exerted to create the desired lethal or nonlethal effect(s) consistent with the commander’s objectives. This phase includes entity analysis, entity development, and list management.

Marine Corps Tactical Publication 3-02A, MAGTF Network Engagement outlines the processes required to conduct an analysis of the numerous entities (friendly, neutral or threat) in the OE. This analysis entails the thorough examination of networks and systems in the OE and includes three steps:

Identifying relevant networks/systems in the OE and categorize them as friendly, neutral or threat ultimately dictates how the entities associated with these networks/systems are engaged. Entities deemed threats will become targets attacked to generate lethal or nonlethal effects; those deemed neutral or friendly are engaged to generate nonlethal effects.

Planners analyze conventional enemy forces and non-state actors to identify catalysts and receptive audiences while also determining an environment that will accommodate success. For example, an enemy may have mechanized forces and special operators. A detailed analysis of the formation variables around the mechanized forces may reveal that they will surrender (when) if the appropriate amount of lethal force is applied. A similar analysis may reveal that the special operations forces will not surrender, but may disband and melt back into society to fight as insurgents.

A preliminary analysis of networks/systems reveals which entities are threat, neutral, or friendly. Analysis products from the previous step help planners identify high-value targets (HVTs) or high-value entities among the myriad entities discovered in the OE. Mission objectives and desired effects reveal high-payoff targets (HPTs) or high-payoff entities among those HVTs or high-value entities. These are then placed on appropriate threat target, friendly entity, and neutral entity lists in preparation for possible attack or engagement. Concurrently, targets or entities with attack or engagement restrictions are placed on the appropriate restricted lists. Joint Publication 3-60, Joint Targeting further details the procedures required to develop and prioritize targets, while MCTP 3-02A describes how to develop and prioritize neutral and friendly entities. The graphic below assists with understanding the taxonomy of entity development: 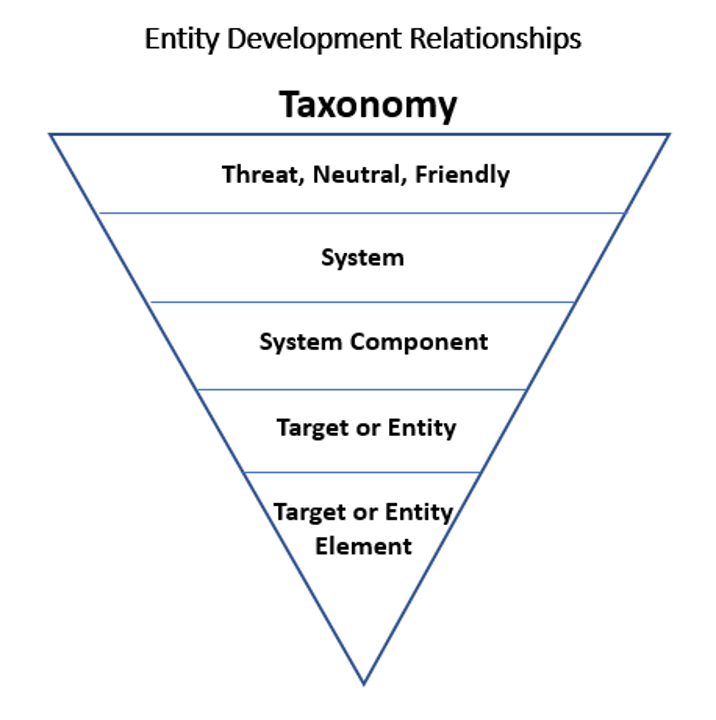 Entity list management begins with entity development nomination and ends with the creation and maintenance of an integrated prioritized entity list. The staff collects and analyzes information from various sources to determine which entities to nominate for development. The process includes entity nomination, vetting, validation, listing, and prioritization. It is imperative that procedures for additions or deletions to the various lists are responsive and verifiable. Entity list management terms and processes are described below:

The graphic below provides a visual depiction of the Phase 2. 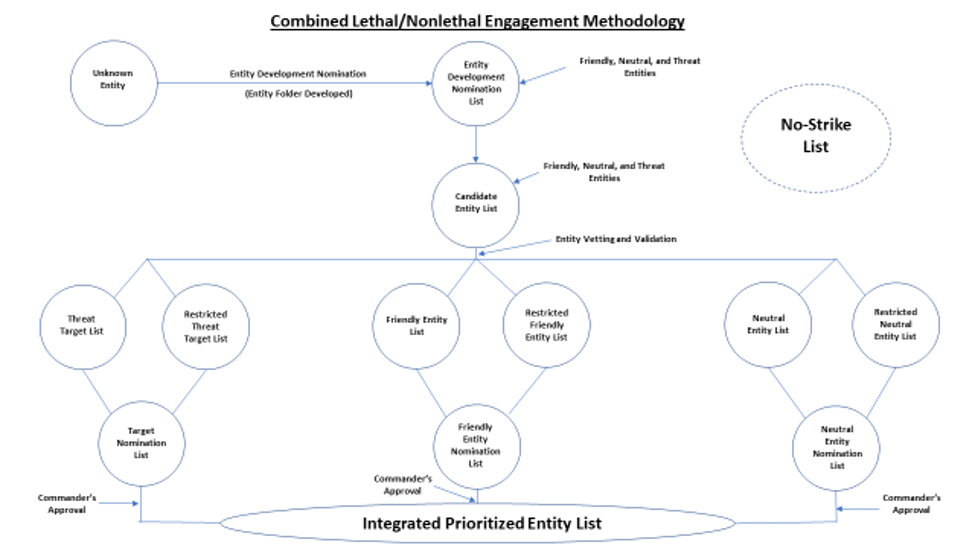 The staff correlates all available capabilities against the targets and entities nominated on the integrated prioritized entity list to determine the best possible engagement solution. This analysis must be performed as a collaborative and synchronized effort across the staff. Since the commander never has unlimited resources to generate lethal and nonlethal effects, the analysis must focus at the target/entity level, matching specific capabilities against identified target vulnerabilities and entity criticalities and estimating the effects across the threat, friendly, and neutral networks/systems. The considerations below should be integrated into the analysis:

The force assignment process integrates the previous phases and fuses capabilities analysis with available forces, sensors, and weapons systems. The combined lethal/nonlethal engagement methodology is based on the logical linkage between tasks, effects, objectives, and guidance. Planners should balance the available employment options with their expected effects. Their recommendations should reflect an assessment of the most appropriate and efficient capability to create the effect required to meet the commander’s objective. This phase is primarily an operations function, but requires considerable intelligence support to ensure collection requirements are validated and sufficient collection assets are made available and properly integrated into the plan.

There are five steps in the force assignment process:

Upon receipt of tasking orders, detailed, unit-level planning commences. The combined lethal/nonlethal engagement methodology supports planning with direct access to detailed information on the targets or entities that was developed in the intial phases. During execution, the OE will change due to engagements by forces. These dynamic changes require attention to positive identification, combat identification, and target validation.

The assessment phase is continuous and assesses the effectiveness of activities occurring during the first five phases. The commander and staff determine if the ends, ways, and means of the combined lethal/nonlethal engagement methodology have resulted in progress toward accomplishing a task, creating an effect, or achieving an objective. Assessment is not limited to combat assessment, which is not performed for friendly and neutral entities. The assessment phase analysis should be shared to inform the overall operation assessment plan.

Joint and Service doctrine currently lacks a single methodology for generating desired effects that facilitates targeting the threat while simultaneously engaging allies/partners or civilians present in the OE. The combined lethal/nonlethal engagement methodology is a concept that supports the current evolution of both targeting and engagement. It fully integrates staff collaboration and cooperation to utilize every capability the commander has available to generate the desired effect for a specific operation and simplifies the management of lethal and nonlethal effects in the battlespace. This methodology, if adopted, is a paradigm shift that will have a significant and direct impact on joint and ground combat element targeting doctrine.

Mr. West currently serves as a concept and doctrine developer for the Marine Corps Tactics and Operations Group, as an advocate and proponent for the ground combat element of the United States Marine Corps. He develops employment concepts, force development requirements, and doctrine as a subject matter expert for the ground combat element’s support of the Marine Air Ground Task Force. He has written or contributed to numerous publications with a focus on offensive, defensive, and stability tactics. Mr. West served 26 years in the Marine Corps ground combat community as an enlisted Marine, infantry officer, and civil affairs officer. His experience included deployments to Kosovo, Iraq, and Afghanistan. Mr. West holds a degree in Finance from The University of Alabama. He is a graduate of the Marine Corps Expeditionary Warfare School and Command and Staff College. He currently resides in Alabama.