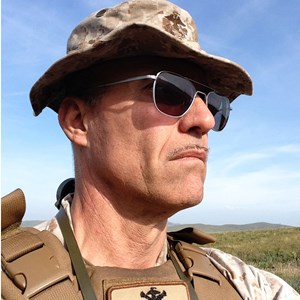 Chief Warrant Officer 5 Neil T. La Sala reported to 14th Marines in July of 2012, he served as the Force Fires Target Effects Officer for Exercise ULCHI FREEDOM GUARDIAN 12, 15, 17, I MEFEX 18 and III MEFEX 19 in Okinawa, Japan/MCB CAMPEN and as the regimental FSCC OIC for INTEGRATED TRAINING EXERCISE 4-13 ISO 23d Marines at 29 Palms, CA. Also, in June of 2014, he served as the Regimental Target Effects Officer for FIREX-14, Fort Sill, OK. He completed the Marine Corps Command and Staff Distance Education Program in May of 2014. In a class of 39 students, he was 1 of 8 Distinguished Graduates. Upon retirement on 01 JUL 2020, he was the most senior Chief Warrant Officer 5 across all MOS fields in the Marine Corps Reserve. He completed 31 years, 8 months of service and participated in 2 combat tours with the 1st and 3D Air-Naval Gunfire Liaison Companies (ANGLICO) in support of Operation Iraqi Freedom.

In his civilian career, Chief Warrant Officer 5 La Sala is a 37-year educator with the Los Angeles Unified School District (LAUSD). Currently, he is a Teacher and the Director of Athletics at Belmont High School in Los Angeles, California. His adjunct campus duties include past Chairman of the Shared Decision Making Council, past President of the California Interscholastic Federation (CIF), Los Angeles City Section Board of Managers and he is a past representative having served on the state CIF Federated Council for high school athletics. In April of 2019, he was the recipient of the LAUSD Top Educator Sal Castro Award. Furthermore, since 1999, he has served on the admissions staff of United States Naval Academy (USNA) as a Blue and Gold Officer.

His personal decorations include the Meritorious Service Medal with gold star in lieu of second award, the Navy and Marine Corps Achievement Medal, the Combat Action Ribbon and the Naval Parachutist Badge. He is married to the former Carol Antonia Cracchiolo of Carson, California.