Back to Active Members 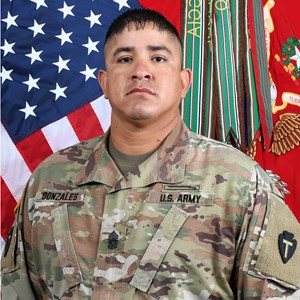 Command Sergeant Major Brian M. Gonzales was appointed as the Command Senior Enlisted Advisor of 1-133 Field Artillery to mobilize as the CSM in support of the Multinational Force and Observers mission USBATT 68 and Task Force Sinai.

He joined the Texas Army National Guard in 2001 and attended basic training and advanced individual training as a 13B (Cannon Crewmember) at Fort Sill, Oklahoma. He is a native of Port Lavaca, Texas and graduated from Calhoun High School in 2002.

He and his wife of 16 years, Angela, have five children and reside in Corpus Christi, Texas.