Tattoo of MG Vernon B. Lewis, Jr.
US Army, Retired 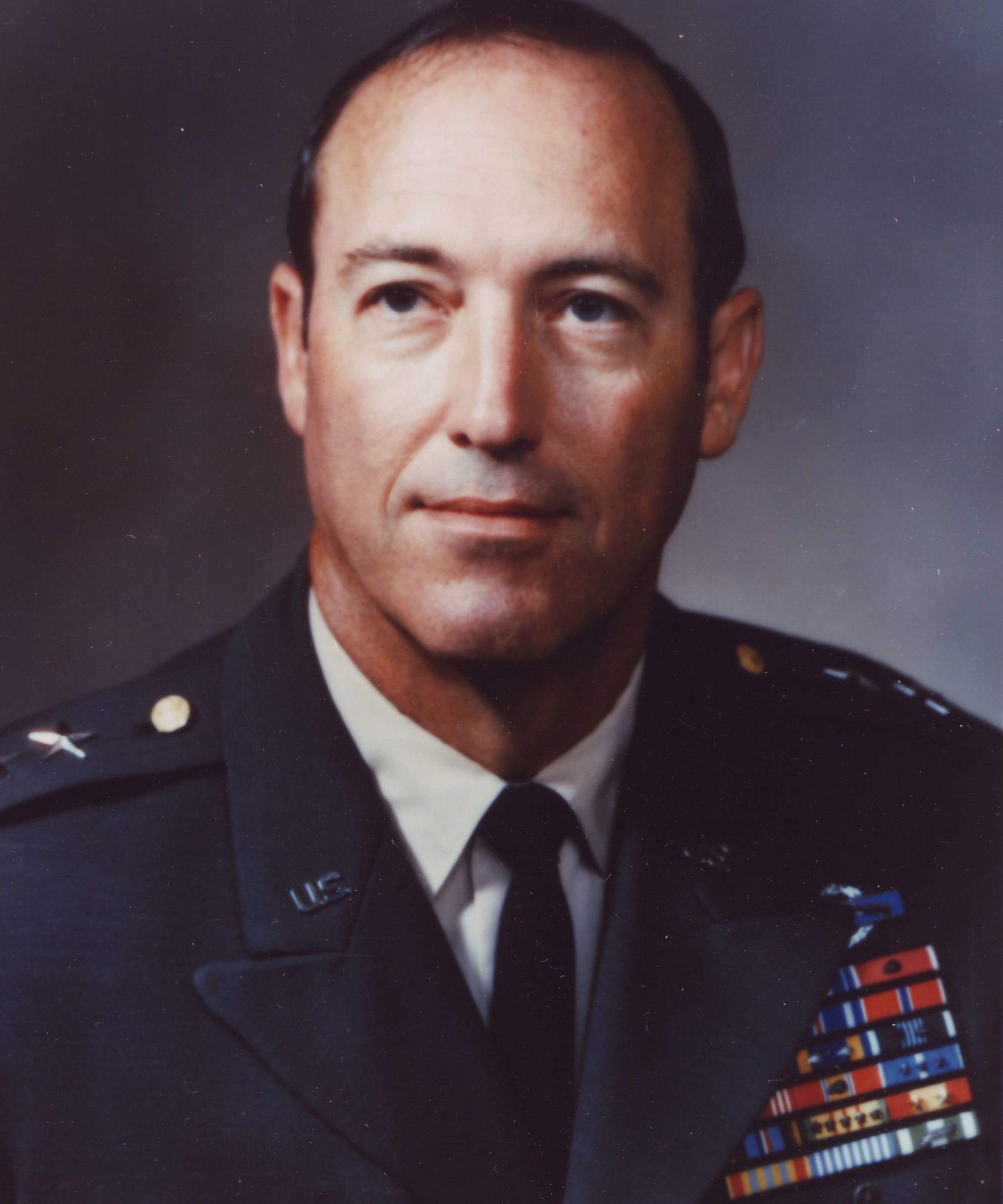 Deep in the Heart of Texas

Vernon B. Lewis, Jr., from Marshall, Texas, enlisted in the Army for one year on his 18th birthday in 1948. He completed basic training at Camp Hood, Texas, and served in the 6th Armored Field Artillery Battalion. He was then assigned to the 14th Armored Field Artillery Battalion where he was promoted to Sergeant E-5 Chief of Section after 8 months.

After another year in college at East Texas Baptist, the Korean War started, so Sergeant Lewis, expecting to be recalled to active duty, re-enlisted in the Army, and went to Fort Riley, Kansas, for Leadership School. He graduated from Officer Candidate School Class #28 as 24th in a class of 115 (it began with 256). He was commissioned a Second Lieutenant of the Field Artillery in March of 1951. Lieutenant Lewis was quoted as saying "better to fight the war as a Lieutenant than as a Sergeant".

Later that year, after graduating from the Basic Field Artillery Course, Lewis left Fort Sill by train and then sailed from San Francisco by ship to Korea. He arrived in Pusan a month later. With the 75th Field Artillery Battalion, he landed by LST at Inchon in December 1951 and joined the war. He served as an Air Observer, Forward Observer (with the French Battalion for a short time), Fire Direction Officer, and Communications Officer for the next 13 months. He was promoted to First Lieutenant on 24 March 1952 in Korea, one year to the day after his commissioning.

In 1953, he returned by ship to Seattle for an assignment to the 560th Field Artillery Battalion at Camp Polk, Louisiana. He was pulled off his scheduled flight and put in charge of a troop train with 300 soldiers headed to Fort Sam Houston for discharge. The aircraft he was scheduled to be on crashed and all on board perished. As a First Lieutenant, he became the S3 of the 560th Field Artillery Battalion. Later in the year, he was back at Fort Sill to attend the Artillery Battery Officer Course. Pat Lewis gave birth to their first child, Laura Jean, in Houston, Texas, in February 1954. After completion of the course, First Lieutenant Lewis was sent to Fort Campbell, Kentucky, that same year for airborne school and assigned to the 457th Airborne Field Artillery Battalion of the 11th Airborne Division as Commander of Battery "B".

In January 1956, First Lieutenant Lewis, his family, and his battery went by train and ship with the 11th Airborne Division on Operation Gyroscope to Germany. Pat gave birth to their second daughter, Teresa Marie, in Munich in the Spring of 1957. While there, Lewis was promoted to Captain and commanded his battery for the entire three-year tour (four-plus years total). Battery B of the 457th Airborne Field Artillery converted to a Heavy Mortar Battery, 503'• Airborne Battle Group, 24th Infantry Division in Munich and they had to find a way to accurately shoot 4.2" Heavy Mortars.

Captain Lewis returned to the States and reported again to Fort Sill (his third time) in 1959 to attend the Field Artillery Officer Advanced Course. After graduating fourth in his class, he was assigned to com­mand Battery B of the 316th Annored Field Artillery Battalion. In 1960, he moved to Fort Leavenworth, Kansas, to attend the Command and General Staff College, followed by six months at the University of Omaha to obtain his college degree in Education. In 1962, Vernon B. Lewis, III, was born in Omaha, Ne­braska.

Oh What a Beautiful Morning

Now a Major, he joined the 82nd Airborne Division at Fort Bragg, North Carolina, in 1963, whereas the Commander, along with another Major, two Captains, one First Lieutenant and a mob of new West Point Second Lieutenants, trained and successfully tested the 11320th Airborne Field Artillery Battalion.

Battle Hymn of the Republic

In 1964, he was back in school, this time in Norfolk, Virginia, at the Armed Forces Staff College. It was less than two years since he had attended the Command and General Staff College and he felt like he had had enough school for one soldier. Lewis admits he played a lot of golf and made a lot of new friends from the other military services during this time. After a short stop for more counterinsurgency training at Fort Bragg, Major Lewis was deployed to Vietnam where he spent a year as a Sector Advisor in Binh Thuan Province fighting the Viet Cong. He almost extended his one-year tour but was unwilling to face Pat Lewis later. So he came home to his next assignment.

In the fall of 1965, Major Lewis went to Fairfax, Virginia, and reported to the Pentagon. There he was promoted to Lieutenant Colonel and spent the longest two and half years of his life. He was an Action Officer on the Anny Staff in the Office of the Deputy Chief of Staff for Operations and Plans. He and four other Action Officers moved the entire US Army to Vietnam, one unit at a time. He made several trips back and forth to Vietnam during this assignment.

Ballad of the Green Berets

By mid-1968 he had had enough of the Pentagon, and at the invitation of a close friend, Colonel Gordon Sumner, he volunteered to return to Vietnam where he spent the next 12 months commanding the 2177th Field Artillery Battalion in the 25th Infantry Division supporting its 3'' Brigade. He returned in 1969 as the Chief of the Field Artillery Committee, and later ran the Combat Suppo,t Group in the Infantry School at Fort Benning, Georgia - this assignment was a reward for having volunteered. Colonel Sumner asked him what he wanted to do and he replied "teach the Infantry how to use its Artillery".

In 1970 Lieutenant Colonel Lewis was sent to the National War College in Washington where he wrote a best-selling thesis on the news coverage of the Vietnam War. There he received an early promotion to Colonel and a Masters Degree in International Affairs from George Washington University.

Back to Fort Bragg, where for the next two years, Colonel Lewis commanded the 82nd Airborne Division Artillery, another dream come true, before becoming the Division's Chief of Staff. While there, he was selected for promotion to Brigadier General. He served under Major Generals Blanchard and Kroesen.

Brigadier General Lewis then transferred to Fort Monroe, Virginia, to the United States Army Training and Doctrine Command as the Deputy Chief of Staff for Operations and Training working for General Bill Depuy.

In 1974, General Depuy sent Brigadier General Lewis to F0tt Sill (his fourth tour) to be the Assistant Commandant, with instructions to "tear down the red fence around 1hat post, and get the Field Artillery back on the combined arms team, and make the Commandant think he did it." Bob Forman, Paul Pearson, Al Akers, and Lee Baxter, among others, helped him.

He didn't get to finish the job as he was promoted to Major General in June of 1975 and reassigned to the Pentagon in Washington as the Director of Requirements, again in the Office of the Deputy Chief of Staff for Operations and Plans. There he worked for Jack Vessey and Shy Meyer.

In May of 1977, Major General Lewis had decided that the Army would not be as much fun from that point forward so, as the youngest General Officer in the Anny, he retired after 29 years of service. He moved his family back to Texas, where he passed on an acceptance to Southern Methodist University Law School and went on to be the primary founder and Chief Executive Officer of Cypress International and MPRI- two very successful and internationally known military-based businesses.

You're Nobody Till Somebody Loves You

He and Pat have been married 54 years. Their three children have blessed them with four grandchildren, two of whom are at Texas A&M. For six years he served as the first Honorary Colonel of the 319th Airborne Artillery Regiment, and he served six years on the Anny Science Board. He is currently on the Board of the Armed Forces Services Corporation and the National Board of the Armed Services YMCA.