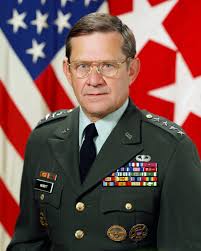 General Merritt was assigned as aide-de-camp to the Deputy Commanding General, 2d Army.

In June 1958, General Merritt came back to Fort Sill as an instructor in the Gunnery Department.

After Advanced Course graduation, he went to Europe as the Assistant Corp Artillery S3, VI Corps Artillery, and then commanded Battery C, 75th Field Artillery. He completed his tour as the Corps' War Plans Officer, G3.

After graduating from the Industrial College of the Armed Forces, he became the Deputy Director, Program Analysis, National Security Council.

In January 1973, General Merritt became the Division Artillery Commander of the 1st Cavalry Division at Fort Hood, Texas. He continued to serve 1st Cavalry as Division Chief of Staff and Assistant Division Commander until November 1976.

He was then assigned as Chairman, Military Professional Development Committee, and the Chief of Staff of the Army's Study Group for the United States Military Academy.

Amidst Thunder and Cannon

He returned to Washington, DC, in July 1983 to become the Director, Joint Staff, Organization of the Joint Chiefs of Staff.

Hands Across the Sea

From October 1985 to the present, he has been the United States Representative to NATO, International Military Activity, Belgium.