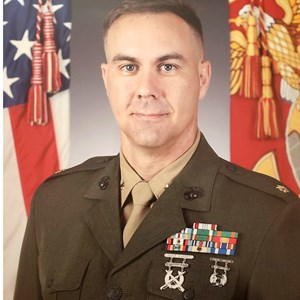 Lieutenant Freeman graduated from the FAOBC in 2009, reporting to Battery S, 5th Battalion, 11th Marines in October 2009, deploying in support of Operation Enduring Freedom in 2010, later serving as HQ Battery Executive Officer, Operations Platoon Commander, and was briefly deployed as an Assistant Targeting officer, CJ35 Future Operations and Plans Targeting Cell, USFK. In May 2013, Captain Freeman reported to Marine Corps Systems Command (MCSC) in Quantico, VA as the AFATDS Project Officer. Captain Freeman represented MCSC with the Ballistics Review Board; Fire Support Integration Board; NATO S4; the Joint Staff J23-4 Joint Targeting Automation Forum; the Joint Staff J6 Joint Mission Thread (JMT) Working Groups for Digitally Aided Fires; and the US Army/USMC Joint Interoperability Conference. Captain Freeman was assigned to 2d Battalion, 10th Marines in July 2016, as the Assistant Battalion Logistics Officer and later as Headquarters Battery Commander. From October 2017 to April 2018, he was deployed in support of Combined Joint Task Force – Operation Inherent Resolve (under US Army III Corps), where he served as Deputy Fire Support Officer and Battle Major for the Task Force’s Strike Cell. Transitioning to the Reserves in August 2018, he was reassigned to MCSC in November 2018, again in support of AFATDS FoS, and promoted to Major in September 2019. From May to December 2020, Major Freeman deployed in support of SOCCENT as the SJ33 Current Operations Officer. Major Freeman returned to his reserve duties in January 2021, where he supported the Fires Branch Capabilities Development Directorate, Combat Development & Integration, as the Fires Direction and Naval Fire Support Liaison Officer in the development of the NMESIS and ROGUE Fires from April to July 2021. He attended the US Air Force Air Command and Staff College from July 2021 to May 2022. In June 2022, he was assigned to the War Plans section, Deputy Commandant, Plans, Policy, and Operations.