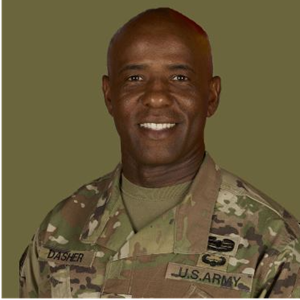 SGM Dwalyn E. Dasher is a native of Jesup, Georgia. He enlisted in the U.S. Army in June 1995 and completed One Station Unit Training at Ft. Sill, Oklahoma. He previously served in the U.S. Navy from Mar 1989 to Feb 1993. He served in every leadership position from Cannonner Number 1 to Brigade Command Sergeant Major.